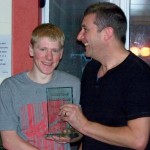 The 2011 Annual Racketball Competition was held on Friday 10th June. Ten players entered who were then split into two leagues.

In the final, James Cray played Josh Masters in an exciting and strongly-contested match. The score was poised at 1-1 games and 14-14 in the last game, with a sudden death point deciding the outcome. James hit the ball into the nick with the winning shot. Well done James!

We use cookies to ensure that we give you the best experience on our website. If you continue to use this site we will assume that you are happy with it.Ok